Join the Crusade Against HSUS lies and PASS IT FORWARD TO EVERYONE! —->>>>>>
Petdefense congratulates Mr. Cox’s show out of Hawaii, and the two witnesses that told the truth about HSUS, which proves—we still know *wrong*  when we see and hear about it, and not all of us are going to stand around like dumbed-down idiots.
http://carrollcox.com/show101809.htm    INCLUDES RADIO SHOW WHERE CONTRACTED EMERGENCY “RESPONDERS” of  HSUS TELL THE TRUTH ABOUT HSUS MISLEADING PEOPLE ON PURPOSE…and how they QUIT………
http://carrollcox.com/broadcast/Show101809.mp3  [has the audio show broadcast–has a long musical lead in]
http://www.archive.org/details/CarrollCoxRadioShowSundayAugust302009_359
This has Mr. Cox interviewing Mr. Pang’s attorney on the 42 USC 1983 lawsuit, including harassment issues and more.
Carroll’s guests:   Ronnie Graves and Allan Schwartz, former members of the Humane Society of the United States (HSUS) Emergency Rescue Team.   After the problems  exposed with the Pang Animal Haven (Hawaii) “rescue” by HSUS,   many others have also raised concerns regarding HSUS’  unprofessional  conduct and “unethical” and inaccurate publicity.

Most of the emergency team have resigned due to these issues.

This is the badge used by emergency rescue team to make them look like official law enforcement officers.

“I want the scum to think we are law enforcement” , said Scotlund Haisley [photo below], Senior Director, Emergency Services, The Humane Society of the United States.

Wayne Pacelle, President and CEO of HSUS, made this statement  in response to complaints: “I like the Cowboy Ways that Scotlund brings to the team. “   That statement by Pacelle shows he did not dispute not deny the badge wearing by HSUS employees or contracted personnel.  Furthermore, there is already a lawsuit against the SPCA that had HSUS people come in and make things into a catastrophe. It is a civil rights lawsuit under 42USC 1983 alleging constitutional violations.  After HSUS people get involved (Louisville, Denver, Pennsylvania, Arizona, etc) there are ALWAYS lawsuits following, since HSUS makes bad law, bad search/seizure, bad marketing ploys, manipulation, misrepresentation, and more evil than we can calculate nationwide.  and it happens because HSUS wants $$$ $$$ $$$ so they can implement the LEGAL CHANGES, and CONTROL the sales of animals, breeding of animals, and buying of animals. Furthermore, HSUS wants to be the POLICE as evidenced by their efforts to fool citizens.

It is remarkable that ANYONE at all donates to HSUS—-but you can help out by telling everyone you know—NOT to donate to HSUS, the deception corporation.

The clear legal issue is that H$U$ knowingly gives and allows the “TEAM” to use such badges, and to purposely pretend they have POLICE authority for intimidation purposes.  This is knowingly done.  It does not matter if they wear HSUS garb if people BELIEVE they are the police helpers, and believe that such helpers HAVE authority.  It is our understanding that the rescue responders quit because they knew that having such badges questioned their *actual* authority—which is what HSUS purposely does on a daily basis. Do we think these responders want to get into legal trouble DUE to the HSUS method of misrepresentation?  Apparently not!

This nonsense done by the H$U$, employing people who pretend they are police, by virtue of even wearing such a badge as indicated;  H$U$ conning District Attys to seize owner’s animals, H$U$ having “emergency” responders WEAR and pretend to act as POLICE officers, H$U$’s continued propaganda to the masses re “bad” breeders, “bad” owners, “bad” rescuers, “bad” hoarders, “bad” everything imaginable.
According to the witnesses who actually were working for HSUS under contract, either for dog SWAT raids, “puppymill” raids, disasters, etc………. T shirts marked with HSUS were used by the contractors……However, when the SPCA in Hawaii invited HSUS people to essentially raid the Pang residence in Hawaii, the SWAT team wore a badge (see pic) which made it appear that they had LAW ENFORCEMENT AUTHORITY. 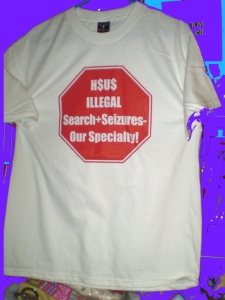 When the contract employee was asked “should the public be concerned with HSUS having people wear such badges”, the contracted personnel said the public should be CONCERNED because it amounts to holding oneself out as having police authority [which they don’t have, and obviously the contracted employee had the smarts to quit and tell the public WHY!!! ]
The person shown below (Scotlund Haisley) who works for HSUS, said that he wants the “SCUM” to think that THEY (the seizing personnel) are police. 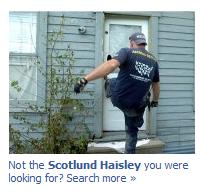 Obviously, PRETENDING to be a police officer, or purposely acting AS IF one IS a police authority—–is ILLEGAL.  The picture below is from http://74.125.155.132/search?q=cache:CHngyvmiOgwJ:ar-hr.com/2009/10/29/paving-the-way/+carrol+cox+hsus&cd=1&hl=en&ct=clnk&gl=us which is the AR-HR site opinion on HSUS re this issue.
On the LEFT is the badge that HSUS seizing agents wore, which obviously is not a far stretch from the other official badges. Mr. Pang of Hawaii will win his lawsuit unless there are some very outstanding unknown circumstances.

More on H$U$ related Garbage………………………..
HSUS Jennifer Fearing Touts Petland Closing in Roseville, CA:
H$U$’s Jennifer Fearing publicly claimed they were responsible for CLOSING THE ROSEVILLE, CALIFORNIA PETLAND STORE recently.
Fearing then went on TV and claimed that all of the reptiles should be GIVEN to the SPCA!  Now if that isn’t a blatant inappropriate ploy to take animals or reptiles that simply don’t belong to you, and say they should be GIVEN to another group—on what legal basis? Are they claiming they are animal control with a warrant?  Are they claiming they know better about how to take care of reptiles, while they are trying to outlaw ownership in Congress of every non native species alive, and have been doing so for several years, over and over?
People:  H$U$ is not and has never been about SAVING any animals.
H$U$ basically doesn’t want anyone to interact with wild animals. As for non wild animals,
the only thing H$U$ wants to do is to eliminate people having anything to do with animals.
In other words, people should not own animals, people should not eat animals, people should not use animals for any purpose, people should not use any animal products, nor anything that contains animal products.  UH—this is the same thing that PETA says.  In other words, H$U$ is just PETA that has enough money and fake data to file lawsuits. Legislation. It’s all mostly AR bullshit.
H$U$ is NOT in favor of No Kill.  H$U$ goes to shelters which allegedly have problems, and recommends they kill all animals  72hr after they arrive, so the animals don’t take up so much space, and so they won’t spread “disease.”  Then H$U$ sends in people to turn the town which has the shelter, into MSN (mandatory spay neuter)……… no surprise there.
H$U$ simply interjects itself into any conceivable issue SO AS TO PRODUCE VIDEOS TO MAKE PEOPLE CONTRIBUTE $$$$$$$$$$$$ TO HSUS.   It’s that simple. Then they twist the truth and make people think that something occurred that did not happen, or that the $$$ is going to shelters, or local shelters.  If that WAS true, why can’t H$U$ account for the $34 million from Katrina???  Why can H$U$ only account for $7million????????????   THAT FACT ALONE EXPLAINS IT ALL.
H$U$ and its puppymill RAIDs or any other raids such as the one in HAWAII—–should cause extreme ALARM to the public—-YET because the dumbed-down public isn’t aware—HSUS continues on its merry way by continuing to conduct SWAT raids and likely, illegal seizures.