LOL … like they say……….due process means what process is due?

Well anyone that’s every taken a gander at looking at PC 597.1 realizes that it’s not exactly a well written law?  But for argument’s sake, let’s pretend your animal got out and the neighbor found it, then the neighbor took pics and posted online claiming it’s animal abuse, [the way the animal looked] and won’t return your animal?  Then neighbor calls animal control and AC comes over, ignores you, then apparently speeds away with your animal.

So more than 10 days later, AC has not contacted you or sent you anything. The only thing they would say is the District Attorney is looking at the case.

Well does the DA even know that law?  Should they?  Would they believe they had exigency?  Does exigency under that code mean there’s no due process or any process at all?  Would they have needed a warrant?  Does the code as written make it clear that the one who seizes (which can be government agency, contracted agency in place of the government, private humane group, contracted or not, or just some dumb neighbor yayhoo person?) — should follow the law?  Or do yahoo neighbors just get to do the seizing themselves, hand animals over, and no one does anything???

If you have never read PC597.1 maybe you should do so.  It’s one piece of piss-poor law that does create more harm than help, it’s misunderstood, and it’s forfeiture to boot.  OH…and YES– it gives runaway AR radical humane groups plenty of opportunity to seize anything they want, not follow the rules for warrants, and then keep whatever they found (inside your house)………and NEVER have to account for it??

Consider this: All of your animals are seized with some bogus warrant, fake affidavit, and misrepresentation. Your child is seized by CPS using the warrant. Your hire a CPS Specialist in child welfare attorney, but Judge claims despite the video evidence and the other evidence, that the child had a dirty diaper so that is enough that you don’t get your kid back because it’s illegal??????  Yet the bogus CPS report said the child was allegedly wallowing in animal feces and urine when that was completely untrue, and there is no evidence that it WAS true?  Only that someone “claimed” it was so? 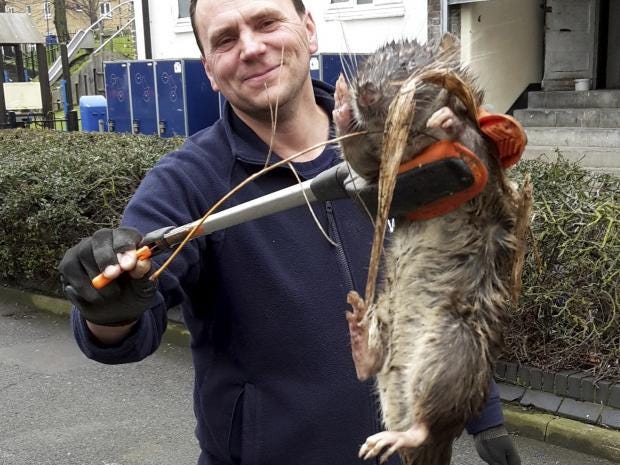 We smell a rat, a really really large HSUS type RAT—-animal activist rat, something very, very, very wrong. Like the huge RATS below that are size of cats?

If the child isn’t being abused, tortured or put into the sex trade it would be a miracle. Trinity County is the largest child trafficking county in all of California. there’s virtually nothing there. Except child trafficking apparently.