It is necessary to explain how generalized propaganda works, since everything HSUS does IS propaganda. We can only try to influence people so that our numbers grow to the point that understanding will sink in, and people start to wake up. Our methods are different than most but the fact is, we know more than most people as to HSUS, lawsuits, and animal law nonsense.

It is not difficult to understand that using 3 legged dogs, one eyed cats, cute puppies and kittens, wildlife animals, etc….. as PROPS for commercials, TV, ads, campaigns— will create emotional reaction in people. Every single commercial on TV and video is purposely designed to elicit a FEELING or emotion, usually based upon desire, fear or even loathing. This is a fixture of both propaganda and advertising.

People may fear losing money. People may fear having bad breath. People may desire new vehicles. People may loathe politicians being bought off. All of these things are feelings which can be raised by viewing particular subjects on TV and video and online.  This is most obvious when “Facebook” is linked to people being killed, people outting their parents, people desiring revenge, people killing themselves because they are not popular.

HSUS hires advertisement agencies which are very good at designing ads, commercials, strategies, and the written word, in order to use PROPAGANDA to gain its goals. For example, HSUS uses cute pups/kittens to raise $$$ in solicitations even tho they advocate to kill animals when space runs out.  HSUS sets up giant RAIDS, SEIZURES AND ARRESTS by announcing, photo-video and campaigns to push it out ONLINE. Every single thing HSUS does has a “hook” which is purposely designed for something. It might be to gain agreement, or to gain an agreement to send money, or to gain an agreement to help HSUS as a volunteer. It can be to get a person to FEEL a particular emotion.

You will see HSUS aligning themselves with ACTORS, entertainment people, legislators, political people, and people with money who have large trusts. HSUS receives endowments from private trusts on a yearly basis. HSUS REQUIRES this huge influx of $$$$$  in order to keep drafting bad animal laws, running horrible commercials, setting up hypocritical stories, using misrepresentation and FRAUD, paying off Plaintiffs to testify in court, rounding up people to file lawsuits against animal owners, using eye candy photos galore to gain attention, and playing on the human emotion of sympathy………… Politics is HSUS.

*Recall that PRIOR to 33m gained by HSUS via Katrina– HSUS was not nearly as large. After the 33m, HSUS was conglomerating with many other AR groups.

HSUS pretty much took the ball and ran and that’s when things really started to get bad in animal laws across the USA. HSUS had people in every state talking to legislatures.

When it has been ingrained into society (which it has been, over 15 years) then HSUS can move to its next incremental step. Each step in EACH bad law has a purpose. It may look OK on the outside (called “on its face”) but the reality and legal implications can be horrific but who would know?  Attorneys keyed to what HSUS does and well-read animal owners might know………… 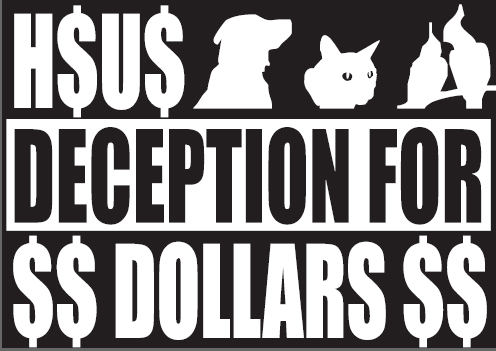