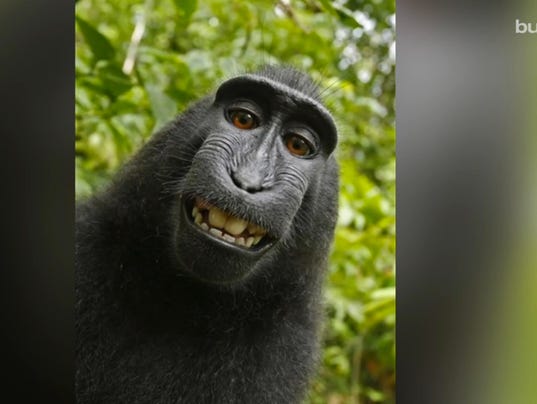 In 2015 People for the Ethical Treatment of Animals
(“PETA”) and Dr. Antje Engelhardt filed a complaint for
copyright infringement against Slater, Wildlife, and Blurb, as
Next Friends on behalf of Naruto. (Naruto is the monkey)…

The complaint alleges that
Dr. Engelhardt has studied the crested macaques in Sulawesi,
Indonesia for over a decade and has known, monitored, and
studied Naruto since his birth. The complaint does not allege
any history or relationship between PETA and Naruto.2
Instead, the complaint alleges that PETA is “the largest
animal rights organization in the world” and “has championed
establishing the rights and legal protections available to
animals beyond their utility to human beings . . . .”

The 9th Circuit’s opinion — joined by Judge Eduardo C. Robreno, with Judge N.R. Smith concurring in part — rested on three main points: whether PETA’s relationship with Naruto was significant enough to allow the organization to be his next friend, whether animals can legally bring a case in federal court, and whether they have standing under the Copyright Act.

PETA has long defined itself as “the largest animal rights organization in the world” — but PETA couldn’t prove that it had any special bond with Naruto, compared with the rest of the world’s animals PETA seeks to protect, the court ruled.

Worse, the court said in a lengthy footnote: “We feel compelled to note that PETA’s deficiencies in this regard go beyond its failure to plead a significant relationship with Naruto. Indeed, if any such relationship exists, PETA appears to have failed to live up to the title of ‘friend.’ ”

The 9th Circuit didn’t appear to buy the fact that PETA filed its motion to dismiss Naruto’s appeal because the settlement was reached. Instead, the court surmised PETA must have seen “the proverbial writing on the wall at oral argument,” known it was going to lose, then tried to save itself from an unfavorable opinion by ending the appeal. The settlement, the court argued, could not have benefited Naruto since he was not a party to the settlement and, when it came down to it, Naruto still didn’t own the copyright to profit from his newfound selfie fame

We must determine whether a monkey may sue humans,
corporations, and companies for damages and injunctive
relief arising from claims of copyright infringement. Our
court’s precedent requires us to conclude that the monkey’s
claim has standing under Article III of the United States
Constitution. Nonetheless, we conclude that this
monkey—and all animals, since they are not human—lacks
statutory standing under the Copyright Act.1 We therefore
affirm the judgment of the district court…

Because activists keep trying to pretend that animals are people, we will continue to see this line of case law.

PETA spent over 3 years ramping up their Federal Lawsuit in San diego to prove that animals had rights to “not be slaves..” and since the animals aren’t humans, the laws applying to human slavery don’t apply ……that the Court let PETA get as far as it did in Federal Court San Diego, was good because it nicely slammed down PETA.  They weren’t harsh when they did it. So by losing case after case, PETA has created a lot of case law— losing case law.