OK Nathan [Winograd]………we agree with most of what you have said over time. BUT we do not agree necessarily as to the following :

“In fact, I am opposed to the commodification of animals, of having the law regard them as property to produce, buy and sell. Animals are not property; they are autonomous individuals, individuals who should be given legal rights, chief among them the right to live.”

“Acknowledging the truth—that both the data and experience disprove the existence of pet overpopulation—does not mean a person therefore subscribes to a whole host of anti-animal positions. Quite the opposite. It means, simply and thankfully, that we do not have to kill the animals entering our shelters under the disproven notion that there are too few homes. There are not; in fact, there are plenty.”

“To save rather than end the lives of half of all animals who currently enter shelters only to die, we do not have to reform the 310,000,000 Americans apologists for shelter killing consider “irresponsible” and to blame for that killing. We just have to reform those who are truly at fault: the 3,000 irresponsible shelter directors who kill when they don’t have to and the four individuals running the national organizations which defend and protect them: Ingrid Newkirk of PETA, Wayne Pacelle of HSUS, Matt Bershadker of the ASPCA and Robin Ganzert of the American Humane Association. U.S. shelters kill not only because killing is easier, but because, historically, they have enjoyed the political cover of pet overpopulation which allowed them to continue doing so, political cover that comes courtesy of the animal protection movement itself.”

PD:  But we are mixing apples and oranges here. Yes, killing animals might make it “easier” to buy an animal from anywhere, but essentially, the animals that most people want are usually not found in shelters. There are some, but the vast majority of desired animals simply are not in shelters; most people want a new puppy, not an adult dog. They want kittens, not a 5yr old cat.

Since most overcrowded  high kill shelters have an abundance of mixed breed medium/large male dogs and feral cats,  it is no secret that the poorest regions have the highest kill rates.  [In other words, you aren’t going to the tony rich area and find high kill shelters…]    Most people do not want animals with unknown health issues, unknown behavioral issues, unknown whatever. This is typical and no amount of whitewashing is going to change it.

Because the truth and reality of the world does not even come close to the discussion of alleged PMs, or commercial breeding, or pet stores, or the like by ARs.    Killing in shelters basically is not affected, nor does it have little to do with any purported commercial kennels or alleged PMs– at all.

The truth is this:  BUYING a pet is an owner’s CHOICE.  If you WANT a choice at all, then you cannot possibly support ARs who claim only rescued animals are good, only re-homed pets are allowed, and all that nonsense.

That is simply an AR belief system that they are trying to FORCE the country to BUY INTO. It also carries with it, huge financial $$$$$ gain, since ADVERTISERS realize they can cater to people who have sympathy for that poor liddle kitty, poor liddle dog, poor 3 legged dog, poor liddle 1 eyed dog, etc.  Believe it.

When we look at commerce, which involves selling of items, buying of items, marketing items, opening and closing business, and in general, all business and selling of items or goods, animals are easily shown under the laws of the USA to fall under the category of goods. Therefore, laws regulate the pet stores, and the goods being sold. If anything, buying a pet store animal is highly safer than getting a free dog from Craigslist or the neighbor.  All puppies can become ill, but at least you have some background on where the animal came from, and you have some recourse under the law. The same usually is true when purchasing from registered breeders.

NOW, because ARs use propaganda to talk about purported PMs, let’s look at the truth. Whether it’s cars, clothing, animals, real estate, you name it—- there is going to be the bad apple in the bunch. BUT because ARs only care about the animals— they decided to pretend that the shelters are filled with wonderful top of the line animals and pet store animals that are expensive, or even little designer mutt mutts that are expensive.  Of course, this is the farthest thing from the truth. Most shelter animals were obtained for free or on the cheap, many have bad habits or have not been trained, and some just plain are awful.

But many are not bad, they are just NOT WHAT MOST CONSUMERS WANT.  This is called SUPPLY AND DEMAND. It is not called PMs v shelters or anything else involving PMs. Shutting every pet store down to get or force people into buying shelter animals is, in one word, baloney.

Rehomed animals can Never ever-everrrrr— replace the commerce trade of buying a pet. NEVER. Believe us, if it could have been done, it would have been done 35 years ago.  People such as ARs simply try and have us believe that “commerce” and “commercial” is bad, that “factory” farming is bad, that anything they don’t like is bad. The only people who would benefit from AR laws are the ARs, since they stand to make more money in regulating and promoting advertising by their own schemes. Take HSUS and ASPCA and PETA for example?

Purported PMs are simply bad examples– they are NOT the norm. The HSUS Arizona lawsuit with Petland and Hunte already proved that—there is no legal basis to take out commerical kennels, period.  That is why the ARs decided to change APHIS, by getting ARs into the government, they unilaterally changed the APHIS guidelines!!

People WANT TO BUY WHAT THEY WANT—– whether it is a specific type, breed, size, color or temperament; whether it is for a specific purpose, use, or training; whether the age is young, old or inbetween.   [Another very bad fact–the majority of fatal dog killings is done by distinct majority of rehomed or shelter/rescue dogs. Not animals owned by original owner/buyer; that fact alone indicates reasons not to get a rehomed dog when you have kids.]                 In most cases, PEOPLE WANT TO BUY A PUPPY OR KITTEN AND NOT AN ADULT ANIMAL, PERIOD.  Can we blame them?  NO.

The closest comparison we can think of is this– adoption of kids that had bad parents, or kids that were addicted to drugs, or kids that have mental issues. NOW–should we FORCE people to ONLY adopt these kids, OR only special NEEDS kids?  Should we force people to castrate themselves or get altered, and then FORCE them to adopt kids they don’t really want to take?  Should we make people FEEL GUILTY by showing videos of handicapped kids, poor kids, mentally disturbed kids, brain problem kids, or just kids with physical defects that can’t find homes??  And these kids have no parents?  It would be ludicrous. But ARs do this EVERY WAKING MOMENT. [Big example, is HSUS shilling for the  video “documentary” of a person going to PA to “rescue”  purported breeder dogs. Then putting the video or show out for HBO and someone makes a killing selling the show. It’s the same old stuff they show on Oprah, Ellen, etc. It brings in money for someone/or some groups. If it took a “year” to film it, it must have taken months and months to come upon the replica they were looking for to “showcase” the bad apple, we imagine.]

ARs simply use propaganda and MIX UP what we are talking about. If one wants to get rid of the bad apples, then you get rid of them. BUT YOU DON’T OUTLAW THE SALE, BREEDING, SELLING, DISPLAY and anything else “related” to such animals, and then claim it’s “animal abuse” because one is not a non profit.  You don’t close down pet store venues and force sales of only “rescued” animals.

You don’t stifle interstate commerce across the USA because you don’t like the bad apples.  Like we have LONG stated, ARs simply use propaganda, and then morph one subject with 5 other subjects.  There is no logic, just emotion.

A commercial kennel is a commercial kennel. The purpose of it is to sell the animals. The subjective “rating” of how the kennel is maintained would in most cases, NEVER EVER satisfy any AR in the world for these reasons and more:

2.  ARs don’t believe animals should be outside

4. ARs believe animals are not property

5. ARs believe animals ARE same as humans and have “human” rights

6. ARs believe animals are good and people are crap

7. ARs believe any method can be used to take down the pet trade, hence the violence and the law breaking they engage in for  impact purposes, hence the videos,etc

8. ARs believe that mixing up facts with emotion will win over stupid humans who are not very bright, and maybe some that are

9.  ARs push their extremist agenda based on emotion and people’s sympathy

10.  ARs seldom can back up their numbers, facts, or evidence and rely on health and welfare, and safety basis for nearly ALL of their “laws” which is not very difficult to do, and is the lowest level of scrutiny in constitutional law, but many of their laws are still invalid, illegal and likely unconstitutional.  As proven by the HSUS laws/cases shot down by the SCOTUS.

11. ARs want to ELIMINATE the pet trade, AND agriculture… therefore purposely bred animals being “produced and sold” will not be something they “believe” in….. See the 12 Steps of Animal Rights to understand why ARs want animals to NOT be property under the law.

If they were not property, the floodgates to hell for all courts would see absolutely no end to the greed the ARs would push to claim damages for their non owned animals. [In other words, animals could be treated as they were people or family] Trust us.  ARs are greedy when it comes to getting $$ for themselves as long as they can justify, in their little minds, the emotion to go with it. AMEN !! they are NOTHING BUT emotion. Propaganda is fueled by it! 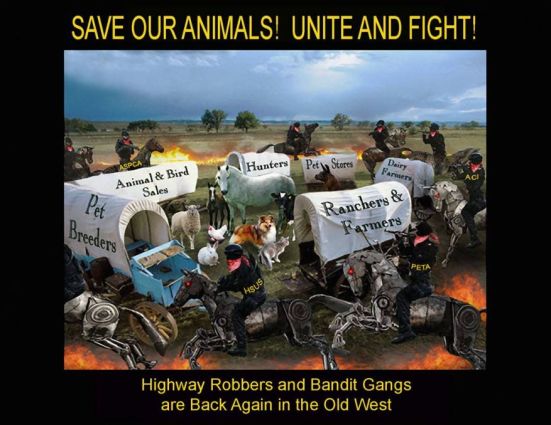